Waxing is one of those treatments that brings people out in a cold sweat at just the thought. Not only do you have to bare your bod, but you then have to endure your hairs being pulled out from the root. It doesn’t sound like fun at all does it?

So, why do SO many people do it?

Well, first off, let me tell you; it really isn’t that bad. Yes it’s uncomfortable, it’s never going to be painless, but it should be bearable and the results make it worth the discomfort.

I alone have performed over 2000 waxing treatments on almost 200 clients in the last year, so that many people can’t all be that insane to keep coming back if it was that bad, right?!

I won’t lie, your first wax is usually the worst in terms of discomfort. You usually have a higher density of hair, which means more hairs have to be removed, which inevitably means more pain (sorry!). I’d usually recommend that first time clients who do have concerns ‘build up’ to the wax that they want. For instance, if they want a Hollywood bikini wax (all off), I recommend they go for a Brazilian first (strip at the front and on labia). But only a few people do that; In actual fact, most will just go for it and have the wax they want straight off. They’ve all survived so far, and 99% even make it a regular thing.

I can honestly say, the growth slows down so much after waxing. So with each appointment you’ll notice a difference in how it feels – both during treatment and afterwards too.

As for stripping off, I don’t ever want a client to feel uncomfortable in my treatment room. I’m not saying I’ll be able to do your Brazilian bikini wax with your jeans still on, but I want you to feel as at ease as possible with them off! I’m super chilled about the whole thing, I’ve been doing it over 15 years, so I don’t take any notice of people’s bits and bobs anymore. It’s just an average day for me to be having a totally normal conversation, or even just thinking about what I’m going to have for my dinner, while I’m concentrating on removing an ingrown hair from an awkward crevice 😆

So hopefully that’s eased your mind about the two main concerns that new waxing clients have, now let me tell you some of the benefits of waxing:

Reduced & slower hair growth – hair growth not only slows down, but I’ve seen in the majority of clients that follicles actually seem to stop producing a hair at all.

Finer hair regrowth – sometimes the hair will start to weaken which makes it finer, but often the hair feels softer and finer because it has got a soft tapered end, rather than the blunt sharp stubble you get from shaving.

NO STUBBLE! – See above!

Low maintenance – just book an appointment every 4-8 weeks and that’s it. No more shaving daily, amazing!

Aside from these benefits there are a couple of minor things you should be aware of;

Obviously I need there to be regrowth to wax back out again, so you are going to have a couple of slightly hairy weeks before you come back, however as I’ve already said the hair is so soft and much less of it, it’s definitely workable even with your summer wardrobe – Full length jumpsuits are always a winner if you have your legs waxed!

If you’ve been shaving, it may take a few waxes to get the ‘silky smooth’ results you’ve been promised on the telly adverts. Due to the hair growth cycles, you could still have dormant previously shaved hairs waiting to grow months after your first wax. So when these shaved hairs do finally decide to grow through they will feel like stubble. On average it takes about 4 waxes 4 weeks apart to start catching the majority of these cycles. But bare in mind, every time you shave between waxes, you’re going to get stubble for probably another 2 or 3 waxes after, til it’s fully grown out. This is why NOW is the PERFECT time to start waxing, as we are mostly covered up so the regrowth is easier to ignore!

If you still need anymore convincing to ditch the razor, check out some of my reviews from the last few weeks from existing clients, you can see more in the testimonials page of my online booking site. 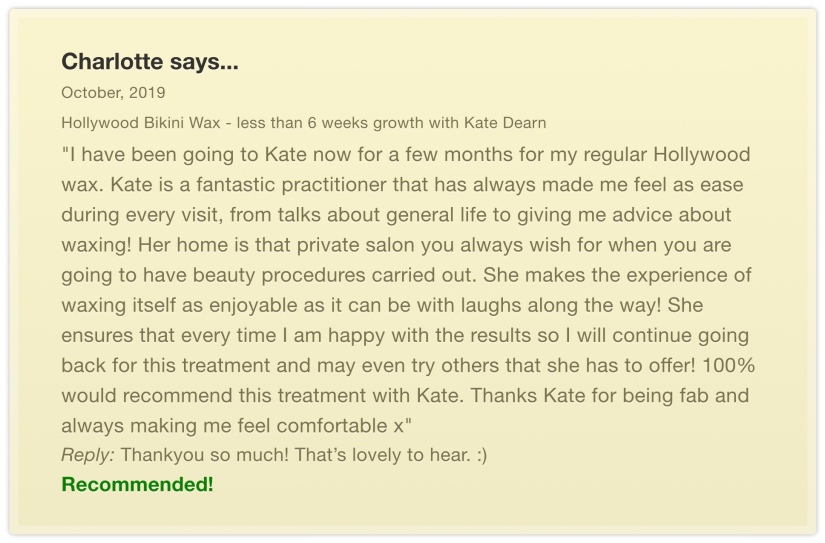